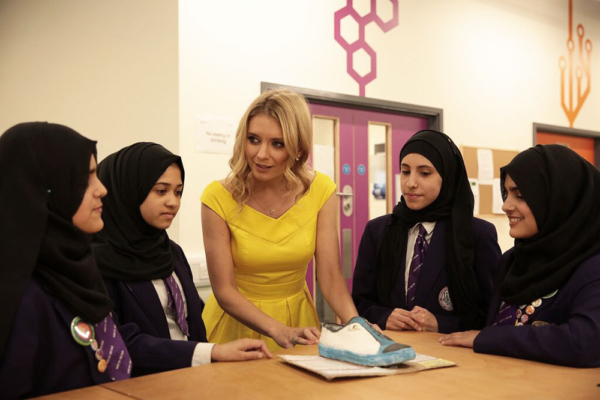 We hope you enjoy this report, written by our students:

As a group of five, we entered the Bright Ideas Challenge run by Shell, a well known oil and gas company, along with 350 other teams across the UK. The task was to come up with an invention that would make Earth more sustainable.

Our idea was to focus on a source of energy that isn’t well occupied: piezoelectricity (electricity resulting from pressure and latent heat). This would be installed in a shoe, aptly named ‘Electroes’, and when mechanical stress is applied the electrical energy generated would be stored in a power-bank to charge a mobile device or any other USB-charged device. At the start of the project we acknowledged shoes as something everyone uses, same of mobile phones, so wide usage of the product could help decrease global energy consumption, with fewer people using mains electricity to charge their devices. Furthermore, knowing that you could save on energy bills, it could motivate people to leave the car at home and walk instead and this would decrease our carbon footprint.

Our bright idea was chosen as one of the top five entries! Finishing in the top five meant that we won £2,500 for our school. As a team, we would like the prize money to be used in STEM (Science, Technology, Engineering, and Mathematics), particularly on engineering fairs where students can unleash their creativity and experiment with their ideas.

Additionally, as part of this amazing achievement, we were given an opportunity to go to a prototyping workshop where we had the chance to bring our idea to life. At the workshop, we got our hands on something we had never used before – a 3D printer. The whole experience was both incredible and inspiring.

Shell has given the finalists another chance to return to London to attend The Bright Ideas Festival where our work will be displayed, and the public will be given the chance to vote for the national champions, who will win another £2,500. We are eagerly looking forward to the festival on the 5th and the 6th of July, as we are interested in finding out what others think of our idea.

Lastly, we were interviewed by the BBC, where we had the chance to briefly explain our idea and share our feelings about this amazing opportunity. We are looking forward to that airing on the 6th of July so make sure you tune in to hear more about the event.