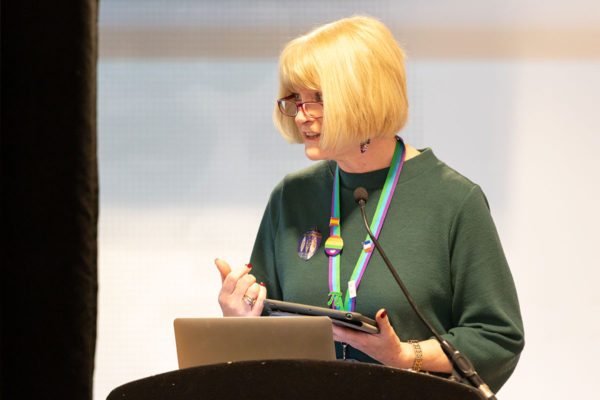 It was back in November, at the end of a long and busy week, when I received a letter from the Cabinet Office that I was to be awarded an OBE for services to education. I was thrilled and delighted and the hardest thing was to keep it a secret until 28th December. I have been very touched by the number of warm emails, tweets and letters congratulating me on this honour. It is an honour for the work of all our staff as we all work hard to make sure all the students in our trust have the best education possible.

The next surprise was when I received an invitation to attend Buckingham Palace for the Investiture… on my birthday! I was expecting the weather to be cold, wet and grey but in fact the weather was gloriously sunny and warm and Buckingham Palace looked lovely against a brilliant blue sky. We were thrilled to see the Queen’s Standard (flag) flying from the roof of the Palace as I arrived with my family. This means the queen is in residence. A policeman confirmed she was to make the presentations that day. This made the day extra special as the queen doesn’t do many investitures any more.

Everyone was dressed up and beaming with pride and happiness as we arrived, walked through the first courtyard and into the Palace. Members of the Household Cavalry were standing to attention in the hallway, with their shiny helmets and breastplates. Beefeaters also walked along the corridors in procession. The recipients of the honours were asked to wait in a large room which was hung with beautiful paintings. We then headed towards the ballroom, we waited in a room hung with huge paintings of Queen Victoria and one of the queen’s coronation. Palace officials were very friendly and welcoming. They explained exactly what would happen and how we should bow or curtsey. We all hoped we would do the right thing in front of the queen. A military orchestra played lovely music throughout the ceremony, which made it all the more enjoyable.

The moment came and the queen smiled and asked about my work. I explained that I worked in three high schools in Manchester, that we did a lot of work with the Duke of Edinburgh Award and that Prince Edward had visited one of our schools this year. The queen beamed and said “Splendid”. She offered her hand for me to shake and that was the signal that it was time to step back and make my way to the back of the ballroom to watch other people receive their OBEs and MBEs. Our families watched and felt very proud of us all.

We then had time to take photographs in the Palace courtyard before leaving the palace and strolling through St James’ Park in gorgeous sunshine. London was at its best and we took the tube to The Shard, one of the tallest buildings in London, with fantastic views over the city and the River Thames. We had afternoon tea and celebrated what was an unforgettable day.